Feminism online: the bullying and the beat downs (Part 4) 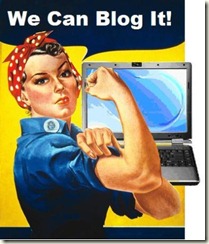 Parts 1-3 of this series of blogs examining online bullying and violence have looked at what sort of experiences feminists and other women bloggers have had online, and some of the tactics they have used to try and minimize their exposure to the threats. I now want to look at what sort of responses feminists have come up with whilst working as a community or any association larger than individuals. The first one I want to take a closer inspection of is the creation of feminist collective blogs sites, initially with a wide lens however tomorrow I will examine in more detail how they maintain their sites as safe online spaces for discussion. I will then turn to other collective or community responses to bullying online.

Part 4: How feminist bloggers are responding – the movement to create a safe internet

One difference between the use of the internet as a site for transnational feminist discourse in the late 1990s and the late 2000s is the rise of what I have termed 'collective blog sites'. One characteristic of early feminist blog sites is that there was an online plethora of individual feminists, acting and interacting as individuals. One argument is that despite the interaction between bloggers, the structure of the feminist blogosphere was one of a huge number of solo bloggers using free platforms with low blog views, and a small number of media companies-owned blogs with enormous page views. I would argue that the structure has changed to include a middle layer of collective blog sites, who look to form feminist communities online and combine the best qualities from the two other layers.

These collective blogs sites allow for a limited amount of the individual freedoms of personal blogs. They call for submission of articles from all readers however the final decision often rests with an editing board. Regular posts are commissioned from invited bloggers. Many offer those registered with the site the opportunity to comment on posts, with customizable profiles, the ability to add profile pictures and control their own identity in their online interactions. On collective blog sites the personalization allows for networks to be built by tracing the posts and comments made by individual users.

I recently received an email from TheFWord blog, a UK-based collective blog site, asking for contributions which I have included a screen shot below. 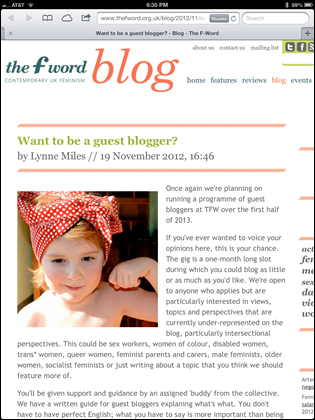 It is interesting to note that they are specifically looking for underrepresented voices in the blogosphere to come forward, however have chosen to illustrate their appeal with a photograph of a white, female, child, who is playing on the ‘Rosie the Riveter’ character. This appeal seems at odds with the choice of image, especially when one considers the iconic, mainstream nature of the character.

The collective blog sites also demonstrate certain features of the large, highly-funded corporate blogs, firstly, that they do possess a certain amount of infrastructure and financial backing. This allows for functionality not available to the free software used by individual bloggers. This functionality allows for a community to be constructed, and for collective political action to be pursued. For those sites not dependent on corporate or media group sponsorship, they are more likely to depend on fundraising conducted through the online community, further tying in community members to the site. New members are often recruited to the sites organically, as the sites often operate email newsletters or highlights of interesting posts which members can forward on to their contacts. 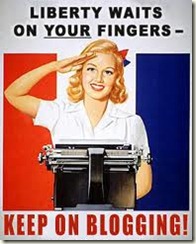 This community structure of the collective blog sites allow for a clear policy regarding online behaviour, setting the perimeters for discourse, and are often self-regulated by the community members. This means that the contributors are protected from harassment and the conversation is intended to contribute positive analysis. Ronak Ghorbani from the Third Wave Foundation believes this rise of collective blog sites to be a shifting to a new feminist consciousness, through sites such as Jezebel and Feministing. She states that she believes these sites to be flourishing as a result of participants joining a community of people actively working for social justice.

A July 2008 article in the Ottawa Citizen included Jezebel as one of several sites launched as part of the "online estrogen revolution", referring to a comScore finding that community-based women's websites were tied with political sites as the Internet's fastest-growing category. It is interesting that these sites are measured in this research as being community-based women’s sites, despite many of them having a collaborative, political agenda. The article also cited Ad Age's research showing that women's Internet use is outpacing men's. These sites quickly became some of the highest profile online collective blog sites, although Jezebel in particular has been critiqued for not having a coherent feminist agenda or guiding ideology.

The next blog in the series will take a closer look at Feministing.com, one of the highest profile collective blog sites, and the mechanisms they use to prevent the levels of violence threatened to feminist bloggers, as seen in earlier parts of this series.  I will also be looking at Blog Carnivals and other innovative methods of creating safe online spaces. The final blog in the series will turn to matters of whether censorship is always necessary for safety, and what direction I think the future discussion will take