Feminism online: the bullying and the beat downs (Part 3)

The third blog in this series looking at online bullying and feminism. You can find Part 1 here, which discussed the internet as an idyllic level playing field, and Part 2 here, which examined the concept of the ‘public woman’ and the sexualised nature of threats and bullying.

I now turn to the varying responses to online bullying or threats of violence. The tactics used in creating a safe online space, vary by personal preference, skill level and opportunity. It would appear that there are a variety of different approaches feminists have taken in response to online harassment and bullying, however I will examine two in closer detail.

The first approach I will discuss are those tactics which have been deployed by individuals, the second are collaborative or community responses. Whilst it would be misleading to say that this distinction also conforms to the timeline of the transition from Web 1.0 to Web 2.0 perfectly, it is also true that some of the community responses would not have been possible without the technological advancement made widely accessible at this time. It is also true to say that the individual responses are still being as widely used as they were in the Web 1.0 era, and that some technological advances have made these obsolete on some platforms, the width and breadth of the internet means that these responses will always be available as means of resistance.

One tactic against online harassment that female bloggers discussed at length during the late 1990s is that of degendered blogging and internet usage. S. Luckman, writing in 1999, identified the fact that the principle mode of self-presentation on the Internet "occurs textually rather than through physical appearance" and that "this capacity for identity exploration has been opened up in ways not possible through face to face, televised and audio communication". Experimenting with the presentation of gender, or in some cases, attempting to completely degender blogging, was met with mixed results. The personalization of our online identities now is often not textual only and social media has removed part of this freedom.

Luckman finds that whilst some female bloggers adopted male designations and assumed the privileges associated with this identity, hoping to reveal that "speciousness of gender binaries and the inequalities of power constructed around them", in practice she finds that this merely serves to affirm the status quo. "It is men's agency which remains unquestioned online". This view is shared by L. Jean Camp, who states that "on the internet, as in life, men dominate discussions about women. Too often when women try to create spaces to define ourselves, we are drowned out by the voices of men who cannot sit quietly and listen". The possibility for critical analysis of online power structures that bloggers were hoping to reveal was not made possible through the use of degendered blogging and it was not a tactic that was promoted widely after the rise of social media and Web 2.0. 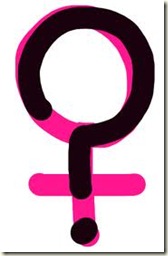 One of the other key tactics used by feminist bloggers is the adoption of pseudonyms and the protection of identity through anonymity. L. Jean Camp discusses this in detail from her personal experiences as part of The Systers mailing list - one of the first women-only spaces online. This women only list was regulated by restricted invitation, with membership offered on the request of an individual or recommendation of existing member. She believes that "computers can give you a degree of anonymity, which may give some women who have never spoken up in public the courage to express themselves". Despite this though, she goes on to explain that anonymity is an isolation and creates a "level of invisibility". She firmly believes that defining gender and identity should be in the hands of those being defined. "You do not want people to define you, especially not by simply looking at your name and guessing your gender".

danah boyd, in her discussion of "Participating in the Always-On Lifestyle", outlines the experiences of a friend who was HIV positive and blogged anonymously about his experiences. She points out that although the blog was anonymous, his friends knew where to find it online and the anonymity allowed him to negotiate social boundaries in a new way. "Technology doesn't simply break social conventions - it introduces new possibilities for them".

I make a distinction here between the previous discussion of degendered blogging and anonymous blogging as some of the highest profile bloggers have taken pseudonyms or blogged anonymously without attempting to adopt a 'male' gender, or a 'genderless' persona. Examples of these include the Girl With The One Track Mind, a blog written under a pseudonym by an author identifies who herself as a sex positive feminist and, through the blog, wants to counterbalance the existing double standard for male and female sexuality.

In asking for contacts on Twitter to share their experiences of harassment online, I was introduced to an anonymous blog which advocates gender neutral child rearing techniques. I asked them via Twitter about their decision to blog anonymously. They told me one of their professional lives prevented them from expressing these opinions publically; however anonymity hadn’t prevented them from being bullied online. I replied expressing an interest in the balance between wanting to protect yourself and wanting to be honest with the other online voices. They replied, stating that they believed the online harassment (also known as trolling in some internet circles) to be gender biased, particularly that directed at feminists and that anonymity did not prevent that. It would appear that although they felt that the anonymity provided a certain amount of freedom for expression online, as a tactic it had not prevented online harassment.

Part 4 of this series looks at collective and community responses to online violence, to be posted tomorrow.