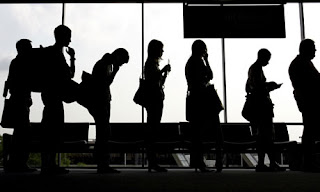 When I'm traveling on my own I like to use the time as an opportunity for some serious people watching. I also have very little patience for idiots, less so than normal. Airports unfortunately seem to bring out the dickhead in a lot of people. Here's a snapshot of my favorite dickheads from today's airport adventure...

Today I watched a mum and son, both English, horsey posh, try and queue jump the security line at SFO continuously for the twenty five plus minutes it took me to get through (seriously SFO, it was embarrassing compared to how efficient other airports are).

Every opportunity to wave their boarding passes in a TSA guard's face and demand preferential treatment, they did so with the unashamed expectation of being treated differently from the rest of us.

'But are you sure we're in the right line? We're travelling business, we get priority'. 'We're being waited for in the Executive Lounge, anyway you can let us through?' 'This clearly says we are the priority.'

It took one last severe telling off from a TSA legend who was taking no prisoners, to finally get them to wait their turn. I wanted to buy him a beer or give him a standing ovation. (But I was going through security and it seemed a better idea to keep my trap shut and not draw attention to myself.)

Every time they got knocked back and told to wait, I was half mortified by their actions (on behalf of all English people) and half wetting myself laughing with how pompous and self-important they were and how they were getting nowhere.

The woman in particular was the most embarrassing. I half expected her at one point to point to her Botoxed forehead and claim her ancestors founded Sussex and there was no way she was a terrorist. THAT'S how bad it was. Her son was one of the snivelly types who had an expression of perpetually smelling something rotting. Maybe it was his manners slowly decaying over a lifetime of acting like an entitled brat.

It's in times like this when I feel my working class upbringing more keenly than other times. There is something ultimately equalling about a good queue. You know that you'll get to the front and be seen within the same time frame as everyone else in the queue. It is a very English thing, to love a queue.

There is nothing that pisses me off more than people that queue jump because they think they are more important than anyone else. Especially if it's because they think they have more money than everyone else. No horse-lady, you are not above the law, you have to take your shoes off and go through the body scanner the same as everyone else here waiting that you are trying to push in front of.

And watching them get put in their place over and over, by working people trying to do their job, kind of made my day. Manners cost nothing, but looking like two generations of entitled dickhead, and giving me ammunition for this blog? Priceless.

Find me on Twitter @hannahmcfaull
Posted by An EastEnd Girl... at Sunday, June 09, 2013