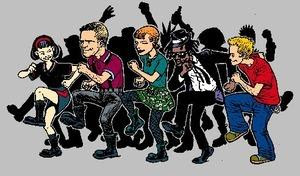 Last weekend Pirate Sara and I introduced my friend Karen to her first ever experience of a pit. Let me preface this by saying that everything she did was of her own free will and we did not coerce her at all. What my mum refers to a mosh pit, I like to refer to as having a dance. As in, ‘can you hold my purse and my hoops? I’m going for a dance’.  So when we’d spent most of La Plebe’s set watching from the sidelines, as they came back on stage for an encore, Sara and I exchanged glances. ‘Fancy going a bit closer?’ I asked Karen.

I love Karen because she’s one of my oldest friends and we’ve done a lot (of damage) over the last 14 years, but mainly because she’s always up for trying something new. I’m fairly sure if I’d suggested something ridiculous she’d have seriously considered it. Anyway, she had an evil glint in her eye and nodded. So Sara and I led the way to the front of the back of the pit (think about it, you know where I’m talking about). And with Karen firmly ensconced behind and between us, we spent the last three songs propelling teenage Mexican punks and massive skater punks off into a new direction and someone else’s path.

Now before I get to the end of the story, I want to take a second to talk about what it’s like to be a girl in a pit. I’m now going to surprise you by saying that the pit is one place it doesn’t matter who you are; male, female, skin, punk, crusty, whatever or however you decide to define yourself, there is one golden rule that keeps the pit a safe place to be. If someone goes down, you pick them up. Simples. It really is. And knowing that if you do happen to lose your footing and hit the deck, it’s usually less than a second before you’re back on your feet. Lifted back by the arms of people you’ll never be able to identify. You just have to repay them by sticking to the golden rule.

And needless to say that she loved it. Laughing about a particularly strong shove that a very surprised punk received from the diminutive Pirate, Karen has chalked the experience as one she’d happily reinvestigate if the opportunity came up.  And her enjoyment of something I’ve come to feel natural participating in, made me want to write this piece.

The pit I can’t resist – Argy Bargy. Without a doubt, and even with the best intentions, I cannot help myself. It’s the best place to see them from.

The biggest pit – I’ve ever been in was Gallows at Rebellion two years ago. The whole width of the Ballroom. Spectacular.

Pit where I lost the most stuff – It’s a spilt vote between the many many many hooped earrings I have lost to Argy Bargy, and the time I managed to lose both earrings, my watch, a cardigan and a headband seeing The Grit at the Boston last summer. I still haven’t replaced my watch.

Pit I gave up on – Cock Sparrer, Amsterdam, 2009. Mainly because I was too drunk to stay upright. Even when I wasn’t being pushed. This was the night of the Dizzee Rascal incident for those of you with long memories.

Most fun pit – Hard to judge as any ska band provokes a weird running jog dance from people which cracks me up, but I think in recent memory it was the Streetdogs at Slims in March. As Pirate Meredith told me afterwards, I was apparently being the pit police, making sure that everyone was picked up quickly!

And there was also the time I was one of three people running a circle pit at my brother in lawish’s birthday party. Cracking.
Posted by An EastEnd Girl... at Saturday, April 28, 2012