This afternoon I’m leaving on a jetplane. Admittedly I’ll be back on Sunday but you know how I like a cold open… Tomorrow night Cock Sparrer play my family ancestral stomping ground. The haggis jokes have been flying round, I spent a lunchbreak looking for a kilt in Dalston (needless to say I was disappointed), yes people, tomorrow night we take over Glasgow.

I’ve been to the city a few times to visit friends who were at university there and to see my nan. If I had to live in another city in the UK, it’d be Glasgow. I think it’s because it reminds me a bit of East London. Either that or after a few whiskeys I automatically feel at home… 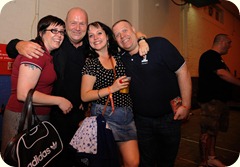 The gig should be a blinder. The invasion of my punk and skin community to the city coincides with the local Rangers Celtic derby. Timing couldn’t be better. For this reason there is a 10pm curfew on the gig. I’m not entirely clear on the reasons for this. I’m not sure letting our lot loose at 10pm as a collective is the best idea if they are trying to minimise drunken shenanigans. I have a feeling that lots of pubs will be designated drinking holes for one team or another, and not belong to either tribe could lead to a lot of disappointed punks and skins. We’ll have to see.

We’ve got lots of family and friends coming with us, some of which have never seen Sparrer play before. They are in for a treat. This week I re-read parts of Steve Bruce’s brilliant book ‘The best seat in the house’. And I started getting excited. Now the day is here I’m practically beside myself with excitement. The last gig I went to was when the band recently played Pilsen, which resulted in me having the best and biggest collection of bruises since Punk and Disorderly 2009 in Berlin. And I didn’t even see Sparrer from the pit that night!

I’ll try and remember to write a review of the weekend when I get back, but Saturday night, about 9.45pm I want you to imagine something for me. I want you to imagine a couple of thousand Scottish punks singing their hearts out. A few thousand Scottish punks singing England belongs to me. The thought of which is making me laugh already. Like I said, it’s going to be a blinder.