A protesting monster, stood on the back of a truck. I went past twice but didn't have my glasses with me so couldn't see what the monster was protesting. Any suggestions? 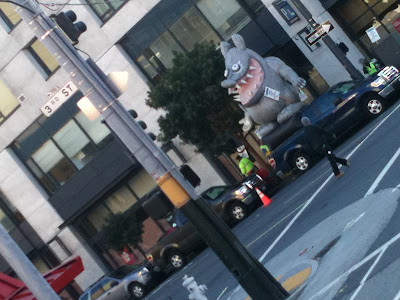 An Eastend Girl's take on day to day San Francisco

Those of you who follow me on Twitter may know I regularly post photos from around San Francisco. I appear to have developed a crush on the very old Chinese women on the bus, particularly their hats.

I've been trying to find a way to keep this blog more current and I think i've found a way.

I'm going to post a photo every day between now and when we leave for London, to try and give you all a view as to how I see life in San Francisco.

A delivery on Mission and 16th

- Posted using BlogPress from my iPhone

London, my tastebuds and the anticipation

San Francisco has more restaurants and places to eat per head than any other city in America. I have eaten well since I have been here. When you couple this with the fact that I live with one of the best cooks in the world, my stomach and tastebuds have been happily satiated since my arrival.

1. Chip shop chips, with a mountain of salt. Ideally from Chris’ Fish Bar at The Drill, Gidea Park. We send my Dad, who always manages to time it as the new chips have just gone in, and he has to wait for them to be cooked. Enough time to snarfle a savaloy… Then I’m going to make a chip butty with seriously-bad-for-you white bread. And then die of a heart attack

2. Indian from Brick Lane, from the Standard Balti House to be exact. Kerry and I have been returning to the same Indian for years now. And we always order the same thing. Mushroom rice, veggie dansak (for me), chicken tikka masala (for the Babylegs) sag paneer, bombay aloo, garlic naan, poppadoms and plenty of mango chutney. And it’s not like Indian food in San Francisco is inferior to London Indian, but it’s just that Brick Lane is superior to everywhere in the world. Fact.

3. A cheddar sandwich made with a French baguette from Sainsburys, made with Flora, cucumber and lettuce. 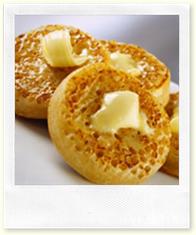 4. Crumpets, with mountain of real butter.  They are my earliest memory (trust me to have one associated with food!) and the only ones I can find in SF are from the freezer section in Whole Foods, and they just aren’t fat enough. You can read this as ‘don’t soak up enough butter’ if you like, either way I can’t wait to much some of these bad boys.

5. Sultanas; they just don’t exist over here and they are a much better snack than raisins in my opinion. I don’t miss them everyday, just every once in a while so am definitely going to stock up.

6. Wagamamas – the Yasai Chilli Men and Green Tea. And from Wagas in Camden, not in Angel. There is a difference you know. 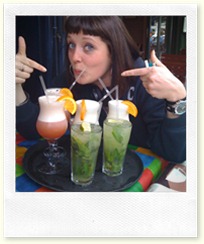 7. I am going to sit at a bar and knock back Jack and Cokes, mixed at a ratio that I am used to. I want to have about five of them, accompanied by quavers, wotsits and frazzles. This is not a picture of Jack and Coke but I’ve decided that I also need Cuba Libre’s Happy Hour Mojitos. Are my other trainspotters up for it?

9. My mum’s roast. And my dad’s roast. Combined. Because they are both as good as each other. And I want to eat both. Roast potatoes, parsnips, carrots, broccoli, cauliflower cheese, stuffing, gravy, yorkshires, potato bake, leek gratin. Apple crumble and custard. All of the above.

10. You may have noticed that I haven’t mentioned any chocolate products, or a fry up. Brunch and breakfast is something done incredibly well in San Francisco, and particularly in our house, plus our off-licence sells all manner of Cadburys goodies, so I haven’t really missed them. I think my final meal I am going to make sure I eat when I’m in London is one of the two staples made by my sister; ravioli and salad or potato boats. Accompanied with pints of lemon squash. That is something I am definitely missing…

And I’m going to return to San Francisco the size of a house!

Being a grown up means…

It was my birthday last week. I am now closer to 40 than I have ever been, according to my smartarse younger sister. So what did I do to celebrate? I decided to spend the day at an amusement park. Magic Mountain to be precise. I’d seen it a few times on our trips elsewhere, and knew there was nothing really like it in the UK. Plus I hadn’t been on a rollercoaster in years. Why not?

Now, due to the fact that I haven’t been on a rollercoaster in years, I hands up acknowledge that I may have missed out on some developments in the world of turning people upside down really fast. But when you consider that my real frame of reference is Peter Pan’s playground, in sunny Southend, you can get an idea of how much this park was a culture shock. (I am kidding by the way, about Peter Pan’s I mean, I definitely went there once after the name change…)

As it was Veteran’s Day, a drizzly Friday in November and one of the last days the park was open this year, we were lucky enough to have no queues. Which meant we could ride at the very front of every single ride we went on. Except for the rollercoaster where you stand up, we were second row back on that one.

I can honestly say that I have never experienced anything like it. And never had my body, which reacted violently to being thrown around all day and causing me to make a hasty escape from our final rollercoaster of the day to be reacquainted with my lunch. Because apparently that’s what being a grown up means. When a rollercoaster makes you puke, you make it to the bathroom. I am now officially a grown up.

When I climbed a mountain and didn’t hate it

So Tom and Kels have returned from their adventure, and I realised that I should be doing with this blog what they did with theirs. In short, I need to tell you a bit about California life. From the perspective of an East End Girl naturally… 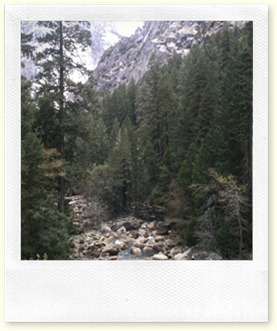 We spent the weekend at Yosemite National Park, staying with friends, one of whom works and lives in the Park itself. We left SF early on Friday afternoon and drove through the Central Valley, the agricultural heartland of the State and where 90% of the world’s lettuce is grown, according to the adoptive Californian tour guide in the driver’s seat.

Having only recently gotten accustomed to the enormity of roadside attractions on our journeys to other parts of the state, I was expecting more of the same, particularly looking forward to whatever could rival the monstrosity that is the Crystal Cathedral, next to the 5, somewhere near Bakersfield I believe… It was great to experience a completely different side of California instead.

As we drove through Modesto and the surrounding areas, the roadside sprouted fruit and veg stands of every size, shape and stock. Nearly all had half price pumpkins. Most were unfortunately closed.

As the clouds moved in, I was reminded that wishing it didn’t rain on your first trip to one of the world’s shrines to nature’s beauty, breaks the first rule of angering the rain gods. And thus, the heavens opened. (Luckily though, we’d attracted our fair share of the Central Valley’s bug population on the windscreen, and the torrential downpour sent them to their watery graves). 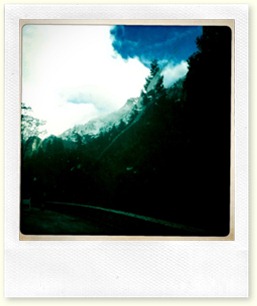 mountains, at various points causing me to lean into the centre of the truck, away from the sheer cliff face we were driving by. I know I’m safe but it’s like when you play Mario and subconsciously jump your hands over the plantpots, it just makes me feel better…

We got to our destination as it was getting dark and remembered to take our leftover pretzels into the house. You know. Just in case any bears break into your car in the middle of the night looking for a post-game snack. That was pretty cool. As was being woken up by the sound of someone knocking on the wall outside. The wall that is 20ft off the ground. We’d been warned that the neighbourhood woodpeckers liked to make themselves known in the mornings, but nothing prepares you for seeing them knocking on the outside of your house in the morning sunshine (yes, we were very lucky, it stopped raining).

Our first day hike was up the Mist Trail to Vernal Falls. And I’m pleased to report that I really enjoyed it. Most of you will know my lifelong aversion to exercise was cured a few years back, but I haven’t done anything like this since then. It was a good test of my overall level of fitness, which I’m very proud to say, didn’t really let me down.

Now, don’t get me wrong, there were definite parts where I had to stop and catch my breath, and my legs still feel like jelly two days later, but overall, I didn’t hate it. Which meant I could enjoy myself, and the stunning, breath-taking, insert adjective here scenery that we were in. Whatever you have read about Yosemite is true, and no human creation will ever come close to replicating its beauty, or how you feel when you stand in the park.

When we got to the top, which followed about a million steps (NOT an exaggeration), we were at the top of the waterfalls and could see for miles. It was brilliant having people with us who knew loads about the Park and following the lead of three experienced hikers, I mainly followed their steps. Except when they went too close to the edge. My stomach turned over a few times, let me tell you, there are certain members of my family who would not have made it up there.

But I did. And I’m pretty pleased with myself. Next step, camping. Just not in the snow if that’s ok…