So I haven’t just come to California with a hanky on a stick and a cat for companionship, I’ve lined up a number of things to keep me occupied whilst I’m here. My Spanish lessons start next week. I’ll keep you posted.

Last week however I commenced an internship with the League of Women Voters of California, working as a Communications Assistant. So far it’s been a mixture of editing web copy, social media comms and ghost writing, something I’m relishing.

The organisation is an unusual choice for a campaigner as the League is strictly non-partisan, not backing any candidate or party. It provides information so that voters can make their own minds up about issues. Something you may guess I feel strongly about. They encourage voter registration and explain the democratic process. It’s quickly becoming obvious that it's a very good organisation for learning the many levels of California government and the mechanisms for influencing them. A perfect deep end to be thrown into.

Plus, I get to work here, how sick is that? 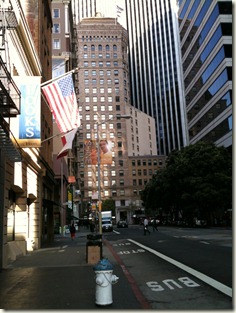 Hello one and all,

So I've done it. This is the first blog post from the city by the Bay. Yes indeed I've upped sticks and got myself over to San Francisco, and having arrived almost two weeks ago, I've been putting off this blog and feeling reasonably guilty about it.

I've been trying to work out why I haven't written anything and the general rule of thumb I write by is that with my writing, there's no sense pushing it. Something will happen when it happens, and then I've write about it. And yes, whilst in the sense that I've moved 6000 miles, a lot has gone on, in terms of things to write about I've still been waiting for inspiration.

I think my current writer's block can be in part attributed to two things; firstly, this blog isn't a diary of my life and there are lots of things that happen that I'll never share on here as it's too personal. This isn't, nor will ever be, one of those blogs. And secondly, after working every day for almost a year, and after keeping myself busy to the point of exhaustion, I am simply loving doing nothing. I've slept off a hangover until 11am and can't remember the last time I did that. I spent an afternoon hoovering and dusting, not the usual 10 minute speed clean of the last 12 months. And I baked a cake. Laugh all you want but it was pretty tasty.

So there you have it, the first post from San Francisco and I'm telling you nothing except how much I'm enjoying domestic bliss. Let's hope something grabs my attention this week!