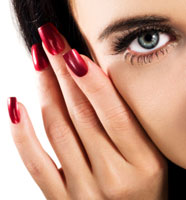 Today I got in a row with someone I don’t know over Twitter. As 140 characters isn’t enough for me to articulate my thoughts on the subject, I thought I’d expand on them more here.
It started when a friend of mine re-tweeted a comment from one of her contacts, a comment which he now admits was both superficial and ‘knob-y’ (sic). The gist of the story goes that he was in a sandwich shop, when a woman with long, red, false nails went to pay at the counter. His original tweet was that he would never take seriously a woman with false nails.

My friend responded with the initial reaction that he should be less concerned with her appearance and more concerned with what she had to say and who she was as a person. And whilst this sentiment is something I wholly support – I believe that you should be able to dress in any way you choose and not be judged pejoratively for it – I’ve blogged here in the past about the complex relationship between appearance, expression and identity, and know that it isn’t that simple.

I was genuinely interested to find out what he thought the woman’s choice to wear false nails said about her, and what she was expressing. He said that it expressed vanity. So, I thought I’d lay out a few of my thoughts on the subject.

I was asked today if there wasn’t a bigger feminist issue that we should be ‘getting het up about’, but I firmly believe that this isn’t just a gender issue. It is a class one. Implicit in the statement that he wouldn’t take seriously a woman wearing false nails were also assumptions about the sort of woman she was. The best equivalent I can draw is if I’d come out and said that I’d never date a man who wore Reebok Classics - both these and false nails are predominantly (not always) a form of personal expression displayed by the working class. By stating that he’d have trouble taking seriously a woman who wore false nails, the Twitterer displayed class based elitism that shocked me, especially from a fellow Labour Party member. It’s as if her false nails betrayed her class and thus allowed for all of the lazy assumptions that are made about the working classes to speak for her; lack of education, lack of ambition etc.

I would say it has less to do with vanity in the dictionary definition sense, and more about displays of wealth. Historically it was the ruling classes who used their material possessions to show that they had control and power. ‘Look at my yacht, my clothes with their designer labels on the front and my cellar of vintage Chateau Neuf De Pap.’ It was a visual reminder of who had and who didn’t. And the things that showed that you ‘had’ were expensive. Personalised number plates are not cheap. They are also not called vanity plates for nothing.

I would posit however that the dichotomy of vanity has changed in the last 10 years. It is now seen as trashy or vulgar to display your wealth. In fact those who are titled ‘classy’ are not those carrying Louis Vuitton bags with the logo printed on the leather, but those who carry the bag with no logo at all. Carrying that argument through to my daily life, living in Mile End I see a lot of personalised number plates, but the cars are souped up Fiestas and the kids driving them are not to be considered wealthy. Why then do I think his argument about vanity is a sham? Because false nails amongst the working classes are an expression of aspiration of wealth, rather than a true expression of wealth. The same as having to have Reebok Classics. That’s how you show that you’re achieving, that you’re not struggling and that you have enough cash to cover getting your nails done. Whenever West Ham played away at a ground in the North, my Dad and his mates would always buy a new pair of trainers. When I asked him why, he explained (in a very tongue in cheek way) that you had to have new trainers to show the Northerners you were richer than them. It didn’t matter that the jeans were 10 years old, or that the rest of his outfit was equally of questionable age, but there are certain symbols which denote wealth, and I would argue that both trainers and false nails are such symbols.

Now it has to be stated that the catalytic tweet has been profusely apologised for, saying that it was a knee jerk reaction and superficial, and I firmly believe that he regrets the comment (not least because he then had to spend the next couple of hours explaining himself), and the point of this blog isn’t to attack him any further, or demonise what I think was an ill-thought tweet. It’s a good job people don’t pick up every tweet I make and scrutinise them in this way! But I think it further lifts the lid on some of the issues that the left has to address if we are to truly regroup, batter the far right and make Britain the socialist ideal we all believe in (!) The identity of the white working classes (and I have no idea if the false nails in question were on a white hand) is something which is just beginning to be talked about. I was lucky enough to be shown this amazing speech from Tim Wise of AWARE (Association of White Anti-Racist Educators), which I think everyone should watch. It’s one of the most intelligent pieces of analysis on issues surrounding race, class and identity that I’ve seen in a while. Enjoy!
Posted by An EastEnd Girl... at Friday, September 10, 2010 8 comments:

Whilst I am waiting for more intelligent minds than I to check my new post (I expect it to cause a stir and I want to make sure it’s an argument, not just incoherent ramblings), I thought I’d share a picture I took yesterday with you. Just reason #542 why I love living in E3. I dare to find another area of London where you could take this photo.

Much love to the Bow Massif. 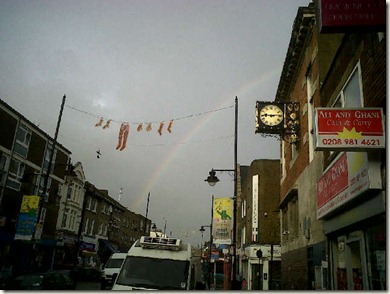