Getting it off and keeping it off

Those of you who know me will know that I’ve lost a lot of weight over the past few years. I was talking to someone last night about how I’ve kept it off, and was trying to convince them that quick fixes are never the answer. I did Weightwatchers, I did Slimming World, all they do is make you talk about nothing but points or sins, plus put the weight back on as soon as you stop following their plan. Healthy eating and exercise is the only way to do it. Or at least the only way that I’ve kept off the 5 1/2 stone that I’ve now lost.

One of the changes I’ve made is to always take my lunch into work, and my colleagues laugh when I have the same lunch as the day before, however I’m just about to knock up a batch of my super-high protein fat-free chilli, so I thought I’d share the recipe with you. It’s dead easy and really good for you.

-handful of dried chillies; crush them and DON’T wipe your eyes afterwards

- 4-5 tins of various beans, usually whatever Sainsburys have on offer, I like kidney, haricot, aduki, black eyed and butter beans, but use whatever you fancy

- 2 tins of chopped tomatoes plus some tomato puree or passatta

- some veggie mince if there’s any in the freezer, it’s not essential

It couldn’t be simpler:

Throw the onions, garlic and chillies in a massive pan with either some olive oil or water, depending on how completely fat free you want it. Cook until soft and see though.

Add the tomato puree. Give it a stir.

Add all the cans of beans, plus the tins of chopped tomatoes. Cover and leave for an hour. Turn the heat down to low-medium heat.

Give it a good stir every 20 minutes or so (usually during the commercial break). I sometimes throw in some black pepper and paprika at this point but it’s up to you.

Throw in the veggie mince and diced red pepper. Cover and leave for half an hour.

Give it a good stir. Throw in the chopped mushrooms. Leave for another half an hour.

Turn off and let sit for a couple of hours. Turn the heat back on low for another hour. Repeat.

And bob’s your uncle. Super high-protein fat free chilli. Freezes really well so perfect for taking to the office. Simples.

And as a treat for reading all the way to the bottom, you get treated to a photo of me at my heaviest, a size 18 and pushing 15 1/2 stone, and a photo of me now, and yes I am holding a home made chocolate cheesecake... 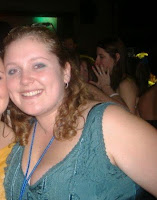 Choosing a suitable birthday card is hard, much harder than it should be. Choosing a birthday card for the first birthday into a new relationship is nigh on impossible. I've just had to choose a birthday card for my boyfriend and literally spent almost an hour staring at the selection in Clintons a few weekends ago, before giving up and walking out without a card.

Maybe I'm reading far too much into it, but a birthday card generally says a bit about the person who's sending it, the person who's receiving it and the relationship they have. I have the same crisis when having to choose cards for my immediate family. So much so that my brother and I have given up and now send each other cards intended to be from the cat, for the best teacher or my particular favourite, to our local priest.

So back to my little Clintons breakdown. Firstly I was never going to choose one that had 'To my lovely boyfriend' written on it, or was covered in pink hearts or whatever. I'd scratch my eyes out with a rusty spoon before buying one of those. It's just not me. Never has been and probably never will be.

What about the supposed humerous ones? Well they are never funny really, not as funny as they think they are. The current trend for captioning old photos with something funny is the closest I'd get, but none of them were right. Plus some of the cards are very English-centric humour, which is dodgy territory when you're wishing birthday love to someone across the pond. So that ruled most of them out, along with the singing Cliff Richard, which although I think are hilarious, I'm not sure translates all that well.

So what did that leave me with? The general happy birthday ones, the 30th birthday ones or the ones with just a photo on the front. Ugh. What a decision.

In the end I got one from the garden centre across the road from my office. I'm not telling you what it is because I posted it late and I don't think it's arrived yet (I know, I'm such a good girlfriend), I had a much narrower selection to choose from and ended up quite happy with my choice. But surely it shouldn't be this difficult? Or I shouldn't care so much? Answers on a postcard, and remember I'll be judging you on your choice of postcard...
Posted by An EastEnd Girl... at Monday, November 08, 2010 5 comments:

I wrote this article for Labourlist last week, but had some computer problems so we decided not to post it because the version I sent in was missing the references. But I quite liked it, so I'm posting it here instead. Enjoy!

Nadine Dorries is playing a very clever game, so clever in fact that I debated not writing this piece. But the more I researched what she’s actually been saying, the more I’ve come to admire the sneaky, manipulative tactics she’s using to confuse the debate about what advice women should be legally obliged to be given when they request an abortion.

Her argument is ironically enough based around ensuring women have all the information to make the most appropriate decision for their lives at that time. This means making it a legal requirement that women who are considering terminating a pregnancy are made to listen to information on adoption in equal measure to information on abortion. So really let’s face it, if you are pregnant you have a limited number of options and a limited time frame to make them in. You can choose to terminate the preganancy – obviously if you are aware that you are pregnant before the current 24 week time limit (something Dorries believes should be lowered). You can choose the carry the pregnancy to full term and find an adoptive family to become parents – but only if you are a heterosexual couple (according to Dorries). Or you can choose to raise the child yourself and make the life changing decision to become a parent. Not a decision to be taken lightly.

Now this isn’t really the clever use of language that I admire in her press release and tweets on the subject. Stealing the language of campaign groups who oppose your stance is an old trick, one used to simply muddy the waters and confuse the debate. Now Dorries has based her press release around three different statistics. The first is a classic demonstration of this tactic. Beginning by maintaining that these are very simple questions, insinuating the simplicity of the answers, the language used in the questions is usually associated with pro-choice organisations. Not the ones which would invite Nadine Dorries to sit on their boards.

And this is where she gets particularly clever. The focus of her argument is that women should be informed of all the possible risks of all the options facing them, whether they be physical or psychological. So far so good. But the reality would be that women would have to be told of situations which rarely occur, giving them added concern and worry.

As a penal reformer, I’m concerned generally about how this would be enforced. Are we going to criminalise overworked doctors and nurses by making them read through crib sheets and mass produced leaflets or face punishment?

The final twist in the tale is a requirement borrowed from the American pro-life lobby. The obligatory cooling off period between diagnosis and decision. Making women who have already made a decision wait even longer before being able to go through with their choice. And this is what makes me really angry. She talks about it being about choice, and respecting the choices that women made. And then patronises them by making them wait, not actually respecting their decision at all. Using the word ‘bullied’ really irked me – women are not victims, we can make the right decisions for our own lives and these should be trusted and respected.

Women who have made the decision to seek abortion have already considered their options. In fact they would have been given information at the time of confirming the pregnancy, they don't need it again when at the point of seeking an abortion.

If you need confidential non-judgemental advice on pregnancy or safe sex, visit any one of these organisations:
Marie Stopes International: www.mariestopes.org.uk/
Abortion Rights UK: www.abortionrights.org.uk/
NHS Direct: www.nhsdirect.nhs.uk/
Posted by An EastEnd Girl... at Monday, November 08, 2010 No comments: