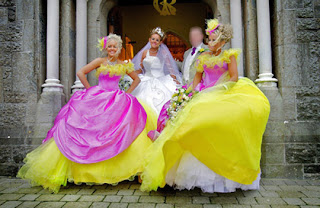 Those of you in the UK can't have missed the current Channel 4 programme 'My Big Fat Gypsy Wedding', a series of five documentaries examining traveller life and culture. Following a one-off show last year which proved massively popular, the series takes more of an in-depth look at the births, marriages and deaths of a highly secretive community. It focuses on the wedding ceremonies of a number of very young traveller women; following them as they plan their weddings, buy their phenomenally extravagant dresses and leave the family home for the first time.

I think the programme makers are intending the series to provoke debates about a group of people who undoubtedly have suffered persecution in various forms for centuries, and last night's episode gave a superficial cursory glance at a community facing legal challenges and issues around land ownership, eviction and homelessness. However, let's not beat around the bush here, all that anyone is really talking about are the dresses and the dancing.

Enough has been written about the wedding dresses and custom to have the biggest, most outlandish wedding dress that money can buy. You can read the usual bile from the Daily Mail here. There will be, I'm sure, many people who just watch the programme for this titillation and the opportunity to gawp at the traditions which are unfamiliar to the majority. (I also think we'd be even more critical if the cost of these dresses was revealed).

What particularly sits uncomfortably with me is the sexualisation of the young girls, and this is what I refer to when I mention the dancing. The 6 year olds emulating Beyonce and Rihanna's bumping and grinding are not dissuaded from doing so, because that's the way that you attract a husband and therefore secure a future for yourself and the traveller way of life.

The problem I have is that it is a false dichotomy to talk about the sexualisation of these girls and young women, because the girls interviewed for the programme were very clear: there is no sexual activity before marriage at all. Being seen on your own with a young man is enough to provoke exclusion from the community.

And that's the crux of the problem; it would appear to me that the Great British public aren't sure what to make of this group of young women who dress and act in a highly sexual manner, but have no sexual activity at all. I've heard comments in my office which have ranged from 'Why do they dress their little girls up like slags?' to 'They all just look a bit dirty'. But in the same breath the girls have been praised for their purity, for want of a better word.

It upsets me that traveller girls are expected to leave school from the age of 11 to help clean the house and when they have no ambitions other than to secure a husband. The courtship tradition of 'grabbing' does appear to be an odd and violent way to show interest in a woman. And issues around the legality of settled sites, taxation and support services have yet to really be examined. Next week's episode focuses exclusively on women and their role in the community, and I'm sure I'll have a more informed opinion then. I'm enjoying watching the series as it's examining a community and customs that I know nothing about, but it does upset me. Hope this goes a little way to explain why.
Posted by An EastEnd Girl... at Wednesday, January 26, 2011