Tales from the aeroplane part 2 (less dickhead spotting and more, well I don't know what) 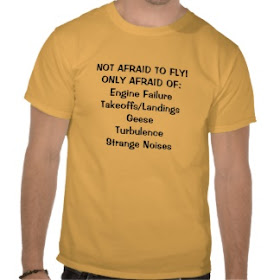 So I promised a follow up to my little tale about the snobby English woman and her son at SFO (thanks to everyone for all the repostings and comments!) and I have to share with you some of the most bizarre behavior that I have ever seen on a plane.

The flight from San Francisco to London is usually just under 11 hours and I try and sleep for as much of it as I can, this time with a window seat making that easier. On this particular crossing I had a young couple in the seats next to me, probably in their early twenties. From the snippets of conversation I earwigged as we were boarding the plane, they were headed to London to stay with friends of his.

It was clear from the moment we all got settled in our seats, that she was not a happy flyer. In fact I would describe her as absolutely petrified. As the plane took off, her face screwed up, her body became a concentrated ball of terror and she pulled all her extremities in to adopt the fetal position. Still strapped into her seat. Next to me.

Then she began to whelp like a puppy with his head trapped in a door. Now I've never seen or heard a stuck puppy, but you can sort of imagine the noise she was making. Get a three year old to do an impression of a puppy wanting to be let in and you pretty much get the picture. This went on until the fasten seat belt sign was switched off. About ten minutes all in all.

Flying can be scary, I get that. The very abstract notion of realizing exactly how high you are above the ground sometimes still hits me halfway through the crossing of the Atlantic. And like pregnancies, the most dangerous parts are the take off and landing so it does make sense to be extra scared during those bits. I sometimes find myself gripping my partner's hand tight enough to cut off circulation and I like to think of myself as a seasoned traveller at this point.

That's not the weird bit anyway. Puppy noises aside, the true weirdness is yet to come.

Somewhere over the Mid-West we hit a pocket of turbulence and were bounced around for a good twenty minutes. It was rough by any standards. The fetal position was re-adopted and we were again treated to the puppy impression (albeit with increased ferocity).

This time, her boyfriend stepped up and tried to comfort her. He leant close to her, took her face in his hands and started to lick it.

Yes, I will write that sentence again. To try and calm his girlfriend down, he licked her face over and over, like a mother cat giving a kitten a wash. I still feel like you are all going to think that I'm making this up but I swear that not only did it happen, at one point he caught me staring in disbelief and just shrugged his eyebrows, as if to say 'What? This is perfectly natural'.

And to top it off, it didn't work; the puppy noises did not abate and she was still really scared. And she now had a wet face. Covered in his spit. Please tell me I'm not the only person who can't quite believe he thought that would calm her down...

If I was scared of flying I think I'd want to hear about how well trained the crew and pilots are, how often they practice for situations that happen once in a blue moon and how safe modern technology has made flying the 6000 miles from London to San Francisco. I'd probably want to hear that everything was going to be alright and that there was nothing to worry about.

That's not what he did. Instead he licked her face and gave me material for this column. Gross, bizarre and marvelous all in one fell swoop.